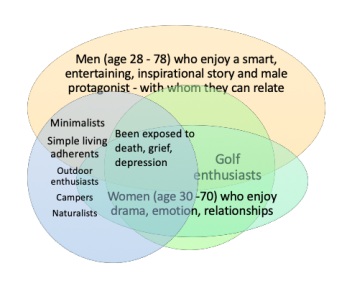 In keeping with the original raison d’etre for this site – to speak to fellow writers as much as readers – I’d like to explore the connection between content and audience. I’m of the opinion that you should write about themes and subjects that you’re passionate about. Of course, I’m probably naïve. I suspect many commercially successful writers know exactly what they’re doing, when they prepare a manuscript outline – and do so on the basis of a novel’s sales potential, as a primary objective. That usually aligns with creating content with a broad market appeal, or alternatively, identifying a niche and genre large enough to drive significant book sales. But let’s put that aside. I want to talk about identifying the audience for the manuscript, as a foundation for promotion.

When I finished The Hermit of Carmel, I read a few blogs related to audience. One suggested development of a Venn diagram to capture and visualize the target market: an audience map, it’s often called. I thought it worthy of action – in part because I’m a visual learner. I find graphs, charts, and diagrams always helpful when trying to understand a complex subject, new to me, or to organize thoughts to solve a problem. Most engineering grads I’ve met take the same approach. I expect a lot of creatives do as well. So, I thought through what kind of reader might find appeal in Hermit.

My approach included an attempt to identify the demographic (by gender and age) as well as by interest. The Venn diagram (as accurate as subjective measure will allow) identifies readers as predominantly male (a natural outcome of a male protagonist?), but with lesser but some appeal to females: cross-referenced by interest, including golf; exposure to some of the primary themes of the novel, including death, grief and depression; and those with an interest in the minimalist lifestyle, the outdoors and/or adherents to simple, off-grid living. Those interests don’t have to be mutually exclusive, of course. A reader might theoretically be captivated by some or all.

Inevitably, there will be existing novels that might be comparable to yours. Find those books, and you’ll find your reader. You’ll get a sense of reader demographics and interests too. Consider the approach to marketing that author or publisher has employed. If it appears to have worked, adopt it.

If you were to boil the core themes, plot and storyline down – as one might a Thanksgiving gravy – what do you get? You get the hook. The hook should help you distill all your research into a core target market and help you focus your book promotion on those most likely to buy and enjoy your book. If you create the Venn diagram, you’ll be able to see exactly who the core reader is, where the circles overlap. I’m not suggesting you ignore all the other readers. But assuming limited time, resources, and focus on marketing cost efficiencies, it makes a ton of sense to start there. That applies to self-publishers and institutional publishers equally.

So, how do you find and speak to your audience? Given what you know about the target reader, go to where they hang out. Find and engage them in their favourite social media sites, advertise or submit content to the websites they frequent, and identify opportunities to guest-post on the blogs they love most. I, for example, pitched Carmel Magazine (published in the city in which the plot of Hermit unfolds) and Golf Digest on the concept of publishing the novel, in serial format, over a number of editions, and/or as value-added content on their websites. I argued that if we accept that frequently refreshed content is imperative to online views (fulfilling their vanity metrics of unique visits, page views and minutes spent on the site), inclusion of regular instalments of fiction that aligned with reader interests, might prove successful. Both ignored me, but it was worth the effort – and yours. Nothing ventured, nothing gained.

I’d also suggest you find the readers of those comparable books you have identified, and “work” them as well – using both traditional and social media platforms.

Lastly, the cover design of your book should align with the theme(s) of the book, and appeal to the target readership. I agonized over the use of a silhouette of a golfer on the cover of Hermit. Why? The book is not “about” golf, per se. I had to make a decision. Either capitalize on the underlying theme that runs through the story, and draw in a core readership who are passionate about the sport. Doing so increases the risk of turning off potential readers who have zero interest in golf. The alternative would have been adoption of more generic cover art, or pick up on some other theme. I considered art that featured a ramshackle cabin, tucked away in a wooded ravine, as an option. In the end, I made a gut decision to run with cover art that reflects a major theme and will have to accept the consequences – positive or otherwise. You’ll face the same dilemma and, with an individual designer or team, perhaps have to make a similar choice yourself.